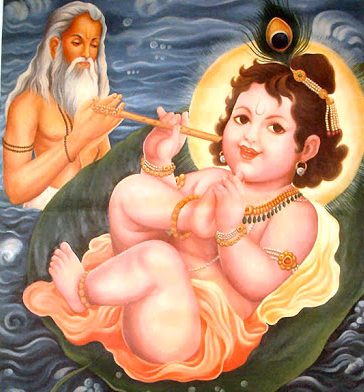 This Stotra has been composed by Sage Bilvamangal also known as Lila Sukh. The Govind-Damodar Stotram is the ecstasic outpouring of pure Bhakti of this great servant of Lord Krishna. This stotra focuses on the following names of Lord Krishn:

Govind – He who lifted the earth (Go) Or He who is the chief of cows.

Damodar – He who is known by knowledge got by self restraint or He who was tied by Mother Yashoda in the stomach or He who keeps the enitre universe in his belly called Dhama.

Madhav – He who was born in the family of Madhu.

Though desiring to sell milk, dahi, butter, etc., the mind of a young gopi was so absorbed in the lotus feet of Krsna that instead of calling out Milk for sale, she bewilderedly said, Govind!, Damodar!, and Madhav! 2

In house after house, groups of gopis gather on various occasions, and together they always chant the transcendental names of Krishna: Govind, Damodar, and Madhav. 3

Even pleasantly lying down in the bed room, those men who repeat the names of Lord Vishnu, would attain a form similar to you, Oh Govind, Oh Damodar and Oh Madhav.4

O my tongue, always worship these beautiful, enchanting names of Krsna, Govind, Damodar, and Madhav, which destroy all the obstacles of the devotees. 5

Indeed, this is the essence found upon ceasing the affairs of mundane happiness. And this too is to be sung after the cessation of all sufferings. This alone is to be chanted at the time of death of ones material body: Govind, Damodar, Madhav! 6

O my tongue, I ask only this, that upon my meeting the bearer of the scepter of chastisement (Yamaraja), you will utter this sweet phrase with great devotion: Govind, Damodar, Madhav! 8

O my tongue, you are fond of sweet things and are of discriminating taste; I tell you the highest truth, which is also the most beneficial. Please just recite these sweet syllables: Govind, Damodar, and Madhav. 9

It is mentioned in our scriptures like Bhagwat Puran , Mahabharat etc that : During the dissolution of the universe, the sage Markandeya witnesses the horror of the great deluge, as humanity disappears under water. Suddenly, he spots a little child floating on a banyan leaf on the dangerous torrents, grabbing his lotus-like toe and placing it in his mouth.Bala Gopala, the miraculous baby Krishna, lies on a banyan leaf, content, innocent, with a hint of amusement on his face. All around him, waters rise to submerge the continents and mountains, drowning every forest, river valley, desert and island. He is unaffected by the pralaya (doomsday), while sage Markandeya watches the miracle, amazed. Markandeya finds himself sucked into the baby’s body and, to his surprise, discovers the whole world, with all its realms, safely tucked inside the child, quite oblivious to the calamity outside. The great sage then realises that the baby is a god, who has withdrawn the world into himself before recreating the universe.