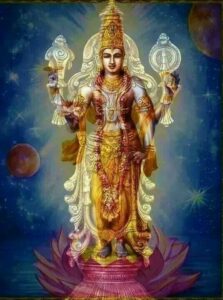 Lord Hari destroys the sins, even if remembered by cruel hearted, or destroys the sins of people who remembered Lord Hari unwittingly, just like fire burns the fuel. Meaning is that Lord’s name is so powerful that if we recite it even unwillingly, our sins gets destroyed. Such being the case, what about those who lovingly chant this name? || 1 ||

He has been to the Sacred River Ganga, to Gaya and Kashi, as well as Pushkaram, on whose tongue reside these two alphabets: HaRi. Meaning is that If the two syllables Hari is on our tongue always, then it is equal to having bath at Ganga, performing Sraaddha at Gaya, visiting sacred places like Kashi, Puskara etc. No pilgrimage is required if we remember Hari always. || 2 ||

What ever good deeds have been done in Varanasi, Kurukshetra as well as Naimisharanya, they are all done by him who speaks the two alphabets HaRi. Meaning is that The good deeds performed at Varanasi, Kurukshetra and Naimisharanya are equal to the chanting of two syllables Hari everyday. Again here, it is said that the chanting of the word Hari will bestow all good results that would be obtained by performing sacred karmas at various pilgrim centers. || 3 ||

All the holy places on this earth, and other auspicious places too, have been visited by him who takes the name of HaRi – just two alphabets. Meaning is that By reciting the two syllables Hari one gets all the punya or good results that is just by taking name Hari one is assumed to have visited all the pilgrimage centers in the entire world. || 4 ||

He has donated 10 million cows, and a thousand gold statues, who has uttered the word Hari. Meaning is that Kanyadaana i.e performing daughter’s marriage and Godaana i.e offering the cow are considered very sacred. If we chant the name of Hari, it is equal to donating thousands of cows and performing thousands of marriages. || 5 ||

All the Vedas, Rig Yajur Saam and Atharva Veda, have been studied by him who utters Lord’s name Hari. Meaning is that The chanting of Harinama is equal to systematic recital of Rik Veda, Yajur Veda, Sama Veda and Atharva Veda. Veda paaraayana bestows utmost benefits. Such benefits are obtained by mere recital of Harinama. || 6 ||

He attains the desirable fruits of the great Yajya AshvaMedha and also of the yajya NarMedha – who utters the 2 sounds Hari. Meaning is that Harinama is equal to performing Ashwamedha Yajna and other similar sacrifices. One can get the benefits they desire by chanting such Harinama. || 7 ||

On entering the path of the ears, these name of the Lord Hari, destroys the disease of this world, destroys even the grievious misery, the name Hari composed of 2 sounds. Meaning is that The chanting of Harinama is like carrying the food towards the last journey, which also destroys the pain of samsaara. It is saviour from many dire troubles of life. The chanting of Harinama at the time of last journey of a man will relieve him of all pains of sansaar ( world )|| 8 ||

With Hands Folded, walking toward Liberation (Mukti) are those, good doers, who utter the word Hari. Meaning is that Even if the Harinama is chanted only once, it will lead to salvation by removing bondage. No other means to salvation is required if one recites Harinama. || 9 ||

This prayer, Hari Ashtakam, Auspicious, Who ever studies after getting up in the morning, He attains long age, strength, well being, fame and prosperity. Meaning is that The recital of this Hariasthakam every day morning will confer long life, strength, health, wealth and glory. This is the phalashruti. || 10 ||

Created or Spoken by Prahlada, this text dries up the ocean of misery of him who reads it, and he reaches that supreme state called Vishnu. Meaning is that One who recites this stotra told by Sri prahlada, attains the abode the Lord Vishnu namely Paramapada, besides all benefits in this world. || 11 ||